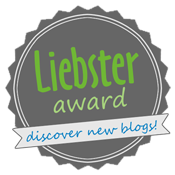 I woke up one morning last week to a comment from Running Betty–an awesome blogger and inspirational runner–saying she had nominated me for a Liebster Award! I always enjoy reading Betty’s blog–she’s kind of a badass (3:50 marathon PR, hello!), and her blog is among my favorite to read. If you’ve never read her blog, check it out immediately.

Anyway, as a relatively new addition to the blogging community, I had no idea what a Liebster Award was. Turns out it’s a fun way for bloggers to share some info about themselves, get to know other bloggers, and help introduce readers to new, as-yet-undiscovered blogs. I’m excited to pay it forward–thanks so much for the nomination, Betty!

Here are the official rules:

So, without further ado, here are my answers to the questions provided by Betty!

What inspired you to start blogging?

I actually signed up for WordPress about a year ago. The blog was originally meant to be written by my cat, since I often wondered what was going through his crazy head. However, that was a non-starter, and I promptly forgot I’d even joined WordPress. More recently, I started guest-blogging occasionally for a website at work–The News Wheel–and remembered how much I enjoyed writing. I’d never really thought about blogging before, because I figured people didn’t want to read my random thoughts, but then I decided I didn’t care and that this blog would be more of a creative outlet for me. Luckily, it turns out people DO want to hear my random thoughts, so that worked out nicely!

Right now, I would say Sleepy. I seem to be sleepy most of the time when training for a marathon, and by the time 8:30 rolls around it’s bed time for this girl! I’ve always enjoyed my sleep, but I enjoy my best sleep when I’m worn out from exercising 🙂

If you could eat only one food, 3 meals a day for one straight year (With no effect on health), what would it be?

That’s really tough to answer, because I love all kinds of food! I guess I’d pick bread though, because it comes in so many different varieties that it wouldn’t get boring… plus, bread. I’m a huge fan of anything with seeds or grains. Also, sourdough. And rosemary bread. And French bread. So I think I would be just fine.

What were your best/worst subjects in school and what would you like to learn now?

Best subject, without a doubt, was English. Worst was either science or maths. I am one of those typical people who can’t grasp basic maths and science concepts because I enjoyed writing and reading, and would much rather put my effort into that than figuring out what X equals. Nowadays, I’d like to learn one of two things: a language (probably French since that’s what I have a base in), or how to bake things without either burning them or severely undercooking them.

If you ran away to join the circus, what act would you want to perform?

Something with animals! I’d teach my cat how to do agility and we would wow everyone in the audience with our awesome skillz.

Would you rather wrestle a lion or fight a shark?

Lion, for sure. I had a similar discussion with a friend a few months ago. If you’re fighting a shark, presumably you’re in the water, and if the shark didn’t kill you, you’d probably drown. Sure, a lion would probably rip my face off and eat me, but I could at least attempt to run away and climb the nearest tree, or throw rocks at it or something.

If someone had a booger hanging out of their nose, would you tell them?

Definitely. I’d want someone to tell me! It’d be easy to do if it were someone you knew pretty well, but regardless of whether the booger person was a close friend or passing stranger, I’d try to find a way to tell them they should probably get to the nearest tissue box, ASAP.

If you could speak any foreign language (that you don’t already know), what would it be?

Ha, I guess I answered this slightly in an earlier question. I’d pick French–I lived in Belgium for three years and took intensive French classes with a private tutor, but could never get past a basic grasp of the language. It’s like my brain would shut down. It also didn’t help that in Brussels, most people speak English, and I lived in the Dutch-speaking part of the country. I think if I wanted to learn French properly, I’d have to randomly drop into some secluded village where no one spoke English, and just get on with it. But I always regretted not pushing myself harder to learn the language while I had a chance.

If you had to pick a theme song for your life (and it would play in the background everywhere you went), what would it be?
This is a tough one, because my taste in music changes so frequently, and I’m sure I’d get sick of whichever song I’d pick pretty quickly. I’ll go with a song from my very favorite band–Queens of the Stone Age–and say “You Can’t Quit Me Baby,” which is probably one of my all-time favorite songs. Although it doesn’t really describe my life, but oh well!

What famous person do other people say you most resemble?
In the past, people used to say Angelina Jolie just because I have big lips. But I don’t really get any comparisons these days. I’m unique!

What is the one thing in life you are the most passionate about?
Healthy living, which to me includes running, yoga, strength training, eating whole foods, and getting plenty of sleep! I’m also passionate about writing and reading. I think that’s more than one thing though.

The 11 bloggers I nominate are (apologies if you’ve already been nominated!):

11 questions to answer should you decide to pay it forward:

I like to run, write, read, lift weights, and eat. I am passionate about dog rescue, tea, and dessert.