Once again, another week has gone by. Is it just me, or is this year flying? Maybe I’m getting old or something. Anyway, once again, I wasn’t able to find much time to blog, so this post is kind of a recap of my busy week. I was completely beat after last week’s half marathon–I’m not used to running that hard for that far! So I took Monday off, and set out Tuesday morning for what was supposed to be a five-mile run, but ended up being three extremely slow and rough miles. I averaged 10:30 per mile, compared to less than 8:30 on Sunday at the half marathon. But every run can’t be awesome, and if nothing else it helped shake my legs out a little. 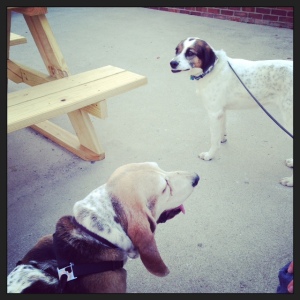 The Pups enjoying the outdoors while I enjoy beer.

Wednesday I ran the usual seven miles with my friend Steff during lunch. That was pretty rough too–at least the first half of it was. My left calf felt tight and I just felt exhausted. That night, my calf was still feeling not great, so I made the decision to take Thursday and Friday off in advance of my last super long training run Saturday. I’m SO glad I did–it just goes to show how important it is to listen to your body!

Thursday, since I didn’t run, Ben and I decided to walk our dogs down to our local brewpub, Star City Brewery, which is about a mile away. We sat on their patio and had a beer, and hung out with the dogs and the brewmaster there. It’s awesome that they let us bring our dogs on their patio, and to make it even better, their beer is amazing. It was a beautiful evening and so nice to sit outside and have a drink after such a long, cold winter.

Saturday, we met up with some of our run group at 6 a.m. for our last–and longest–training run. There were four of us going 22 miles or so, and I was definitely nervous that my calf would start playing up again. Turns out, the extra rest day on Thursday was probably the best thing I could have done. I didn’t quite make it to 22 miles, but I made it over 21 which was my goal. And it was a bit slower than usual but considering my leg wasn’t feeling 100% right, I was super happy with my time (21.3 miles in 3:25:25 for an average pace of 9:37).

After finishing, we pretty much came straight home, showered, had lunch, and then had to get out of the house with the dogs because we had a viewing (our house is for sale right now). So we walked the mile back to Star City with the pups and sat in the sun with some beer. The two extra miles were just what we needed, and really helped stretch out our legs. Once we got back, we both had ice baths (my first time–not pleasant at all but it helped so much!), then made and ate pizza. I also made cupcakes again–this time rum-soaked raisin cupcakes with rum glaze and rum buttercream. They were probably the best cupcakes I’ve ever made, if I do say so myself.

This morning, I met Steff for a yoga class, and then we had lunch. After that, Ben and I went to a local MetroPark and walked the pups again for a couple of miles. After that, we stopped to get some frozen yogurt with a coupon I had–free froyo is the best! Now, it’s time to start prepping dinner and food for the week, and then we do it all again!

How about you–ever tried an ice bath?

Do you have any brewpubs close to where you live? I’m so happy that local craft breweries have grown so much in popularity lately in Dayton–it’s so nice to meet and talk to the people who make your beer!

25 thoughts on “Last Long Training Run, and Other Escapades”

I like to run, write, read, lift weights, and eat. I am passionate about dog rescue, tea, and dessert.